The Philadelphia Eagles are one of the bedrock franchises of the NFL. Formed in 1933, the Eagles have featured some of the greatest players in NFL history on its roster. Philadelphia has won three championships in franchise history, but none since 1960. Those early Eagles teams featured some of the best Eagles players of all time. Steve Van Buren, Chuck Bednarik and Tommy McDonald are among the Hall of Famers to have spent significant time playing for the Eagles. These players are considered some of the best Eagles ever.

The 1980s began a run of success for the Eagles. Some of the best players in Eagles history have been on the team since. Reggie White and Randall Cunningham are twosome the top players from this era. Under the watchful eye of head coach Andy Reid, the Eagles experienced some the best years in the team’s history. Led by players like Donovan McNabb, Brian Dawkins, Brian Westbrook and Jon Runyan, the Eagles won four straight NFC East titles and went to the NFC Championship game four times. The Eagles were defeated by the Patriots in Super Bowl XXXIX.

The Philadelphia Eagles have won several NFL Championships and are a contender nearly every season. With legendary defensive ends, like Reggie White and Norm “Wild Man” Willey, the Eagles have been known for great defenses. 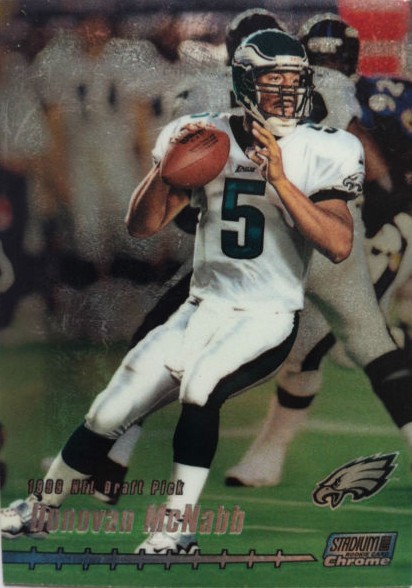 The greatest quarterback in Eagles history without question. Norm Van Brocklin won a title, Jaws took his team to a title and Randall Cunningham was the most impressive offensive weapon in his prime but Donovan was better and for longer.  Donovan McNabb  led the Eagles to five NFC Championship games and Superbowl XXXIX. The only thing McNabb didn’t accomplish in his time with the Eagles was winning the Superbowl. 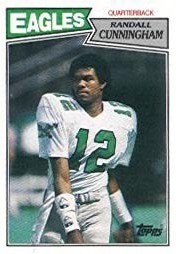 Randall Cunningham was the “Ultimate Weapon” at quarterback. Scrambles like a running back but passed liked an All Pro quarterback. Randall finished his Eagles career with over 22,000 passing yards and over 4,400 rushing yards. 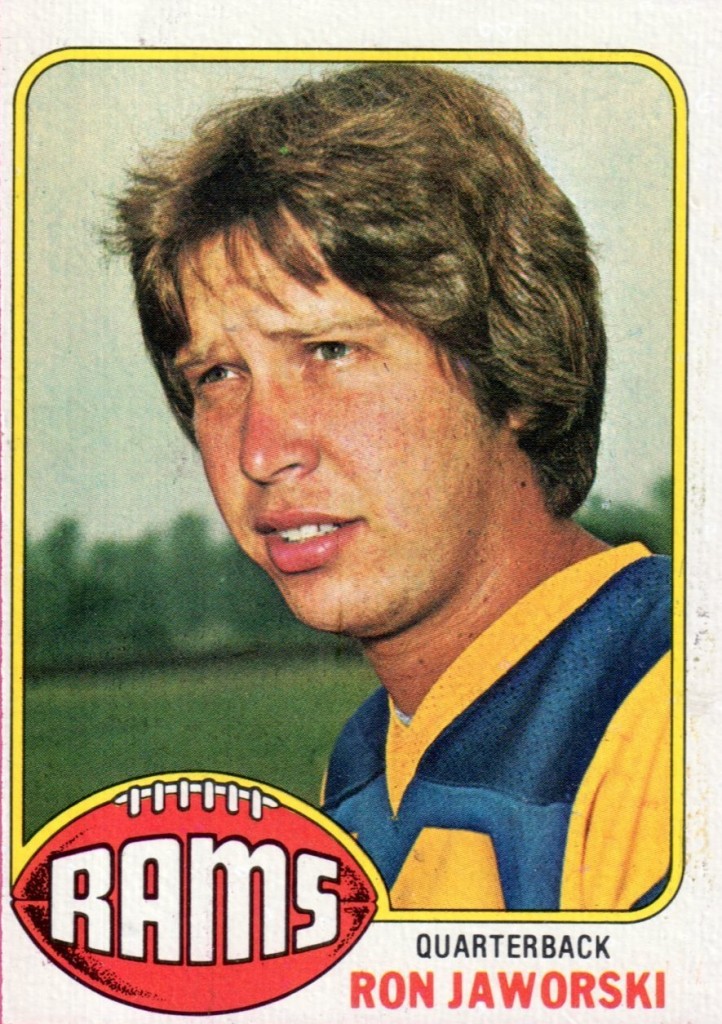 Ron Jaworski’s nickname was “Jaws” and he was the Eagles starting quarterback from 1977 until 1986 when he was replaced by Buddy Ryan with Randall Cunningham. Nobody was better at breaking down a defense whether it was as a quarterback or now the NFL analyst for ESPN.  Jaworksi played 10 seasons for the Eagles where he threw for over 26,000 yards and 151 touchdowns. He led the Eagles to Superbowl XV against the Raiders. 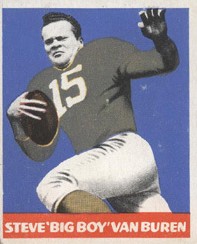 One of the all time greats. Two time NFL Champion with 5,860 career rushing yards and 69 rushing touchdowns. Van Buren was an All Pro his first seven seasons in the NFL and was a part of the 1940’s All Decade team and the 75th Anniversary Eagles’ team.  Van Buren finished his career as the NFL’s all time leading rusher but was later passed by Joe Perry in 1958. Steve Van Buren’s #15 jersey was retired and he was inducted into the Hall of Fame in 1965. 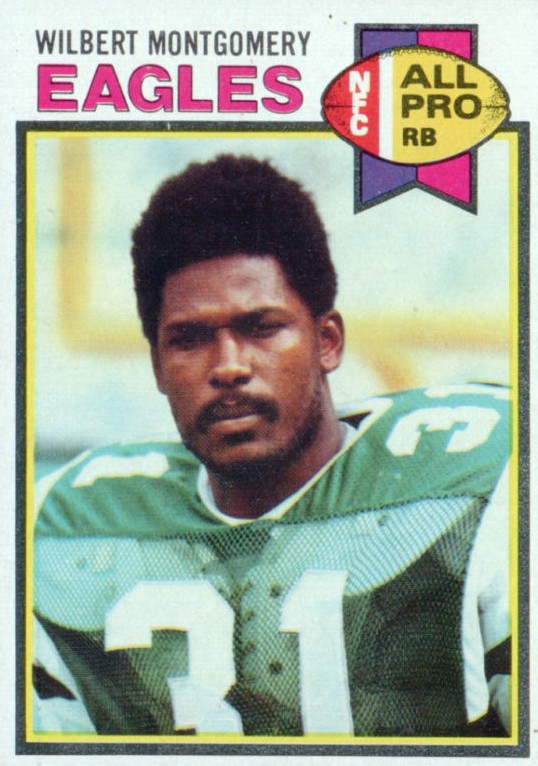 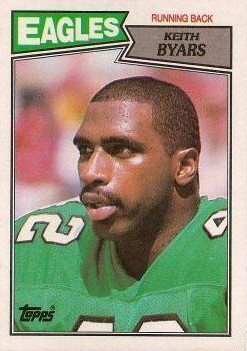 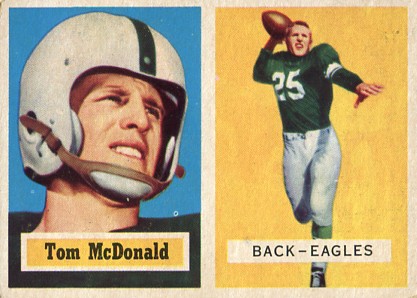 Tommy McDonald was the Eagles’ wide receiver during 1957 until 1963. He is most famous for two things. First off, he scored the first touchdown of the 1960 Championship game to put the Eagles up 7-6. Also, he was the last non kicker to play without a face mask.  Tommy finished his career with the Eagles with just under 5,500 receiving yards and 66 touchdowns. He led the NFL in receiving in 1961. McDonald was a six time Pro Bowler and 30 years after he retired he was finally inducted into the Pro Football Hall of Fame in 1998. 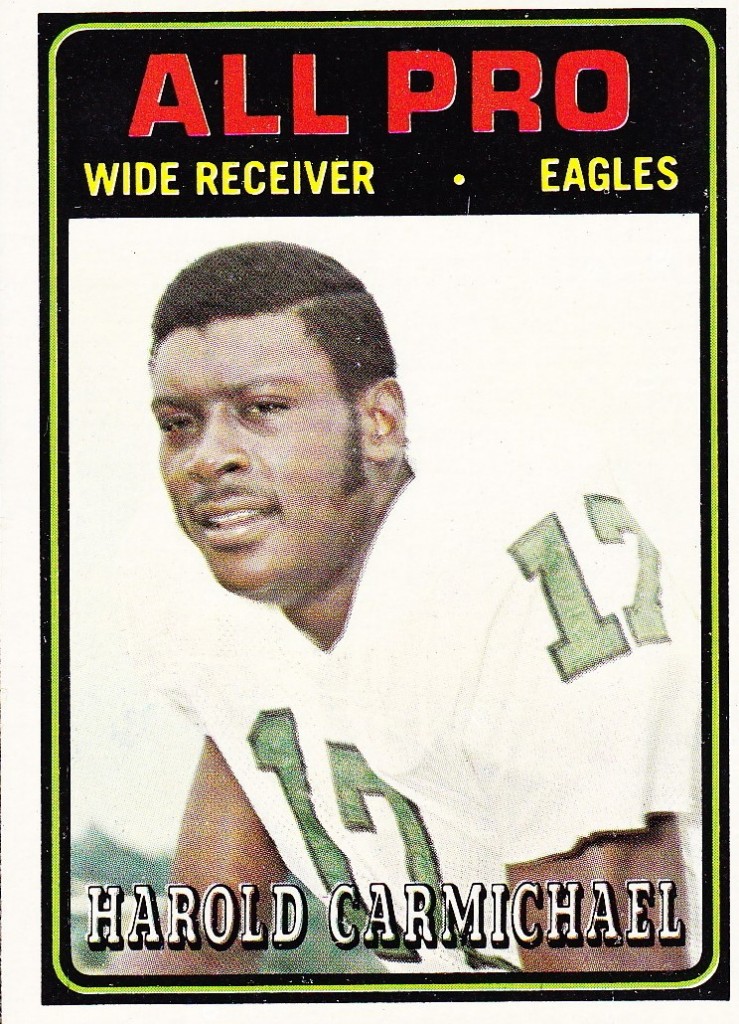 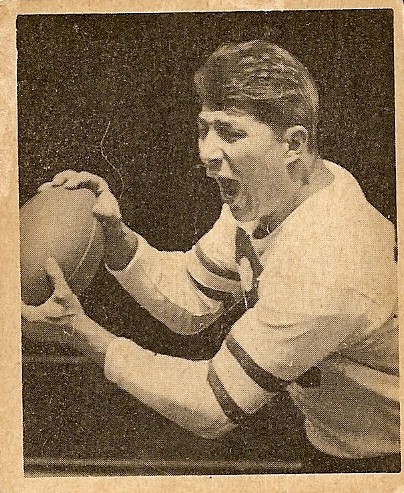 Pete Pihos was an end for the Eagles from 1947 to 1955 and a key member of two championship teams. The Eagles won three divisional titles in Pete’s first three years. He caught a touchdown in the 1949 NFL Championship game in a 14-0 win over the Los Angeles Rams. Pete lead the league in receptions three straight years in 1953, 1954 and 1955.  Pihos would finish his career with six All Pro selections. He was later named to the 1940’s All Decade Team, The Eagles Honor Roll, and the Pro Football Hall of Fame in 1970. 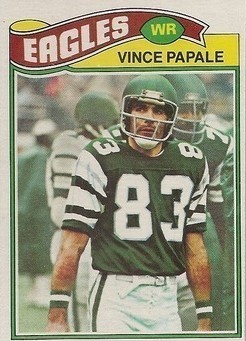 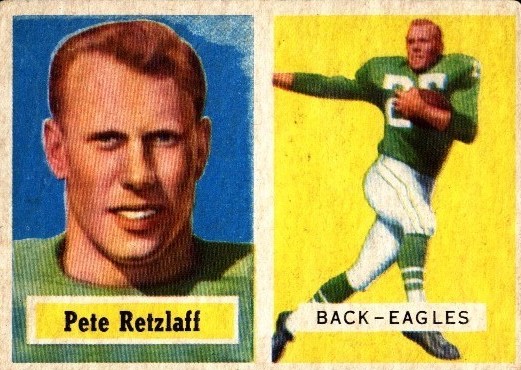 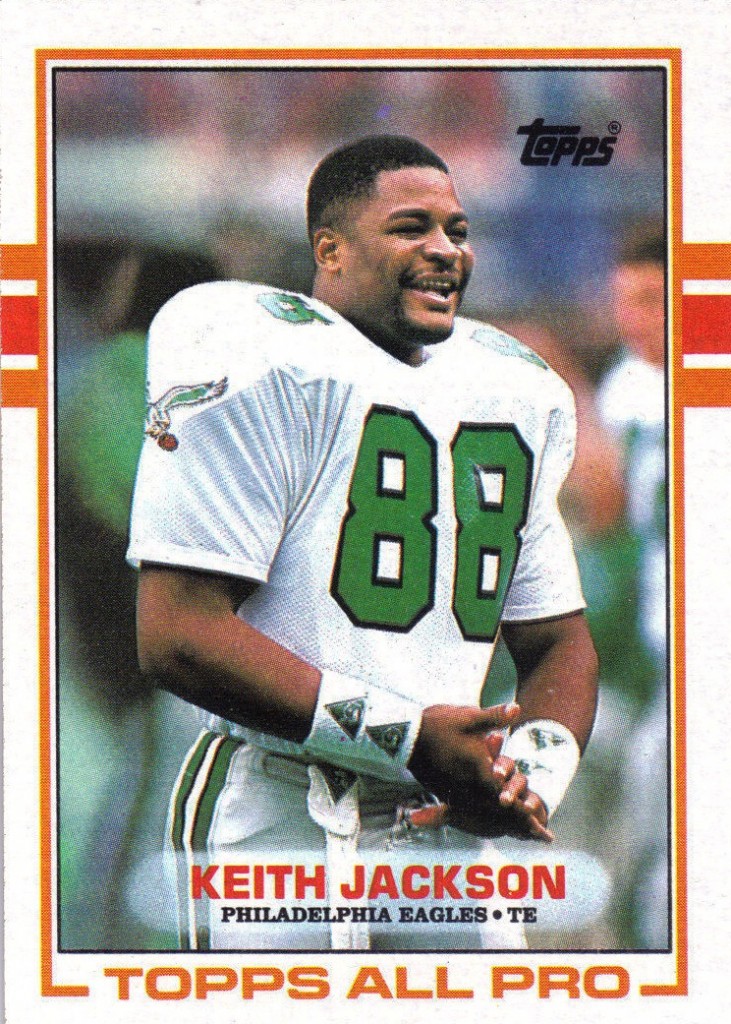 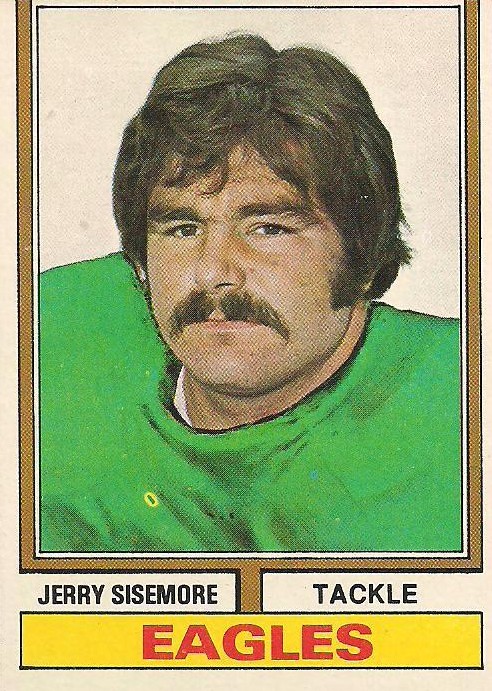 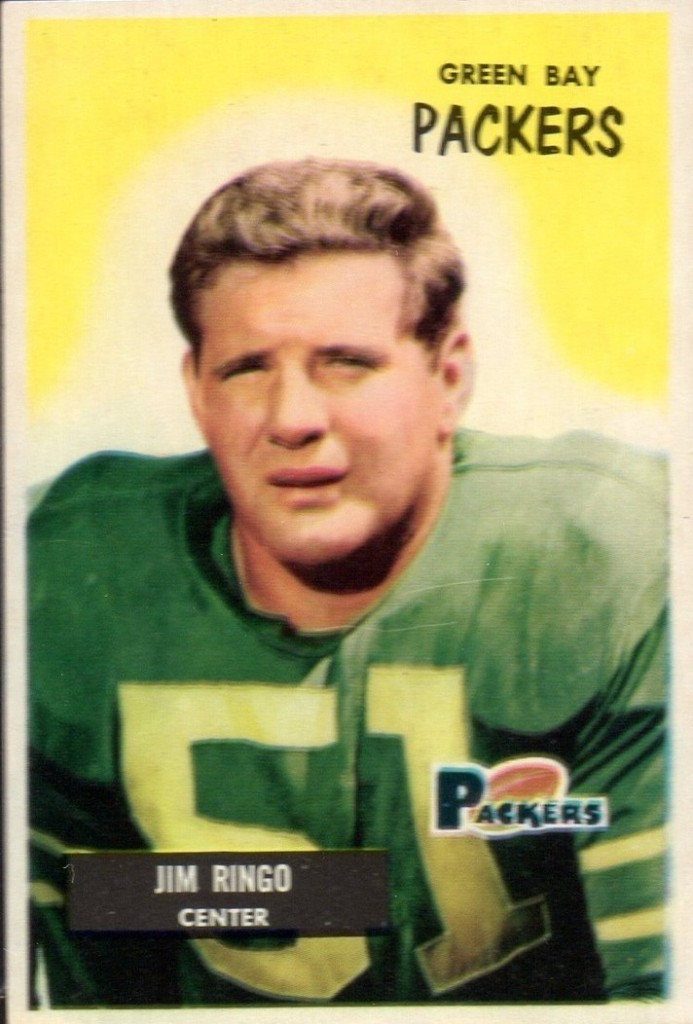 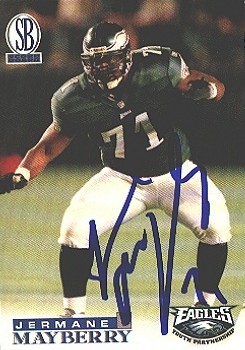 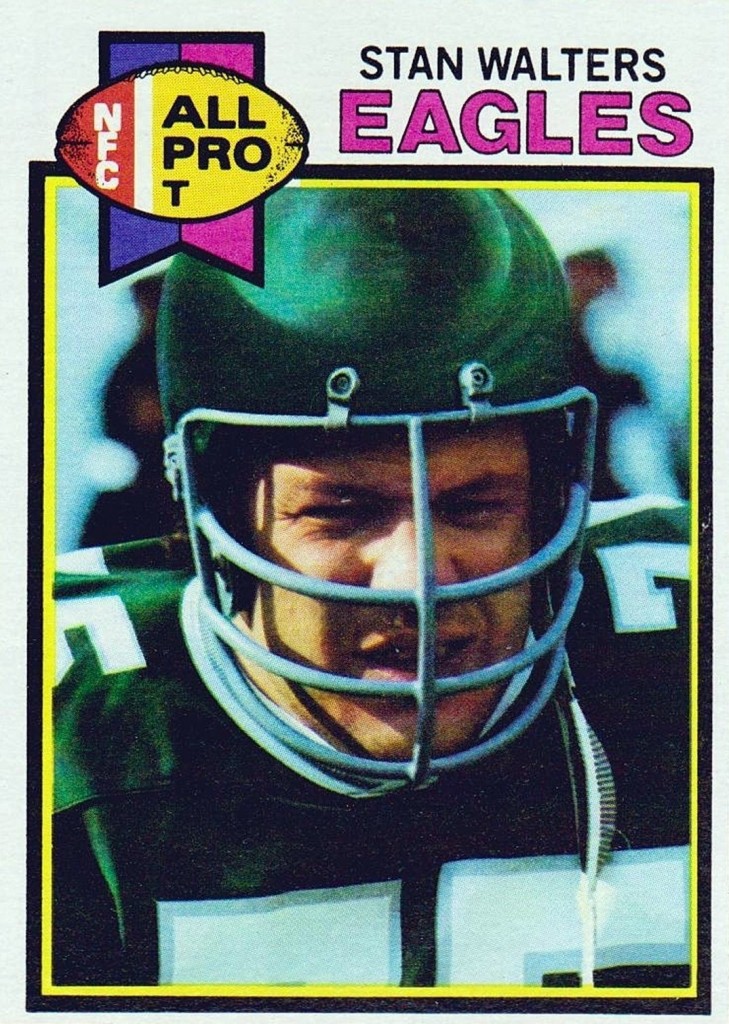 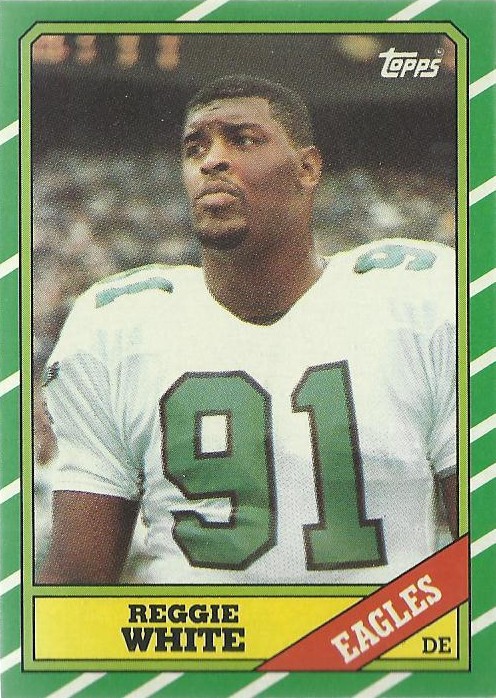 The “Minister of Defense” is the Eagles all time leader in sacks with 124. Reggie White was not only the greatest defensive ends in Eagles history but also NFL history. During the strike shortened season, where Reggie White only was able to play 12 games, he still managed to pick up 21 sacks. White was the only player to ever rack up 20 plus sacks while playing 12 or fewer games.  White finished his career with the Eagles with seven selections to the Pro Bowl and All Pro teams. He was also the defensive player of the year once as an Eagle in 1987 and his #92 jersey was retired.  Reggie White passed away due to a fatal cardiac arrhythmia. He was 43 years old. Reggie was elected into the Pro Football Hall of Fame in 2006. 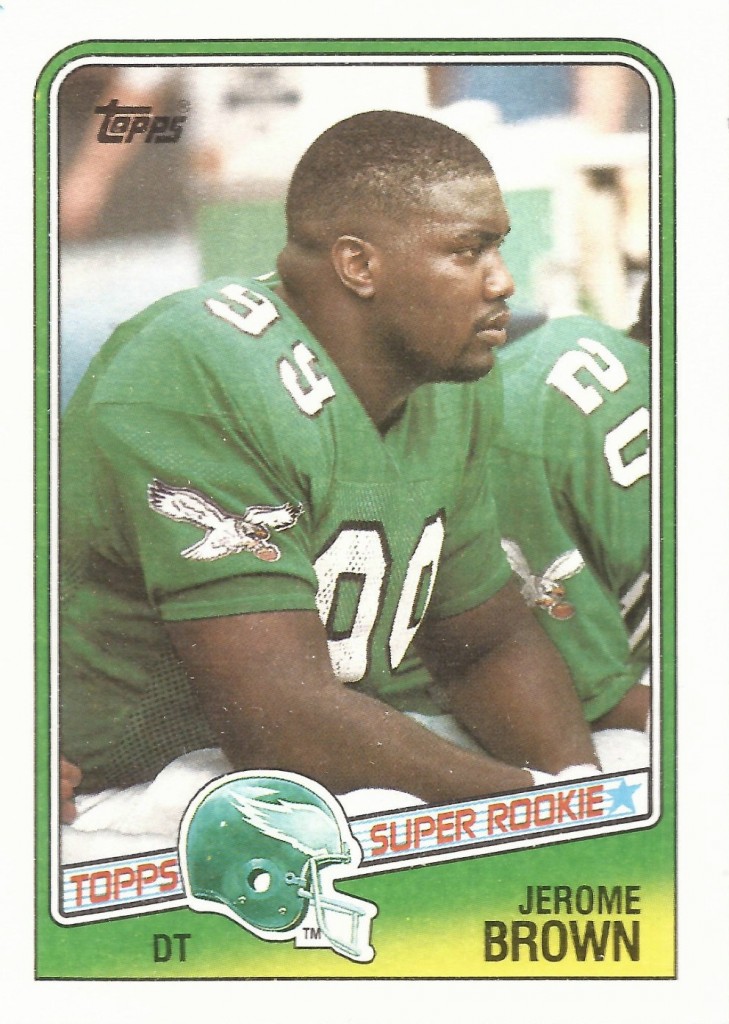 Jerome Brown was the Eagles defensive tackle from 1987-1991. Brown finished his career with 29.5 sacks and three interceptions, astounding numbers for a defensive tackle. Jerome Brown received many honors during his five year career. He received two Pro Bowl and All Pro bids. 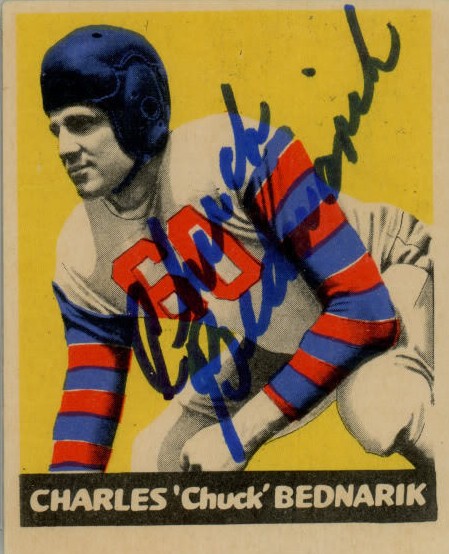 Concrete Charlie was and still is the greatest Philadelphia Eagle of all time. Bednarik is also famous for knocking Frank Gifford out of football for 18 months. Bednarik had an ongoing feud with then player Chuck Noll. In a game against Noll’s Browns, Bednarik nailed Noll in the face on a fourth down punt.  Concrete Charlie was one of the toughest players in the history of football. He played both center and linebacker. He was the last of the 60 minutes men. 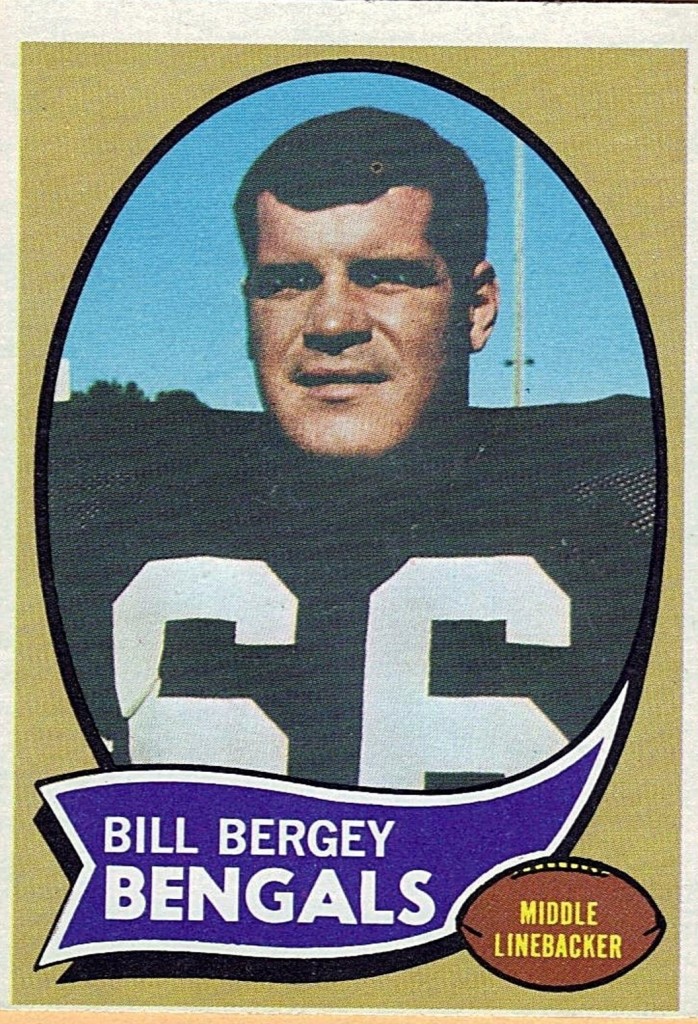 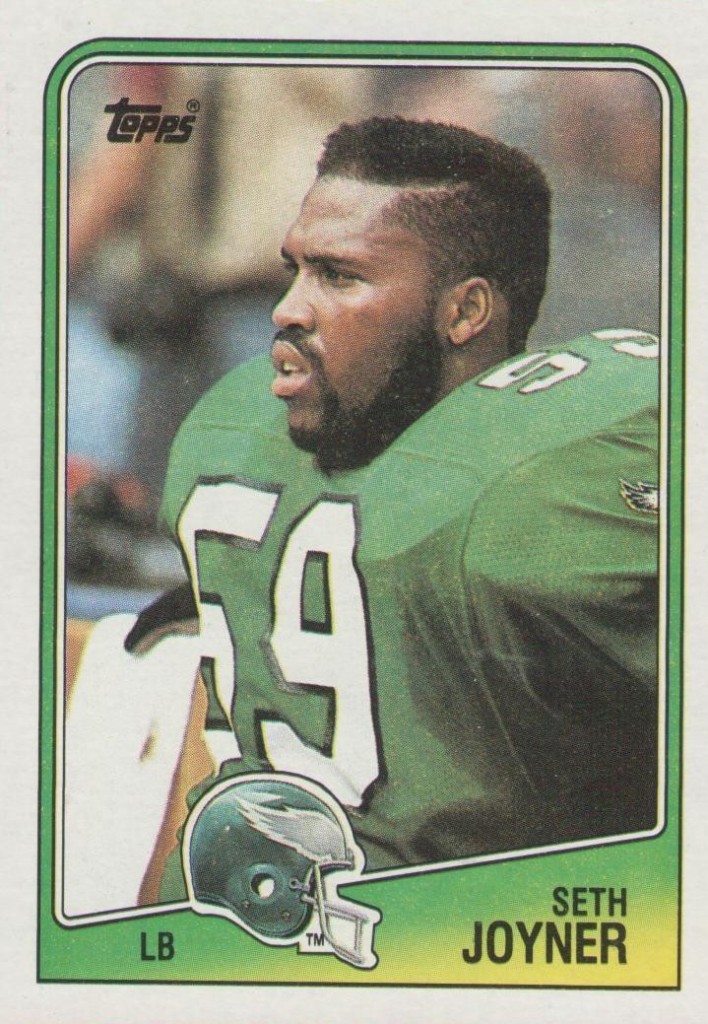 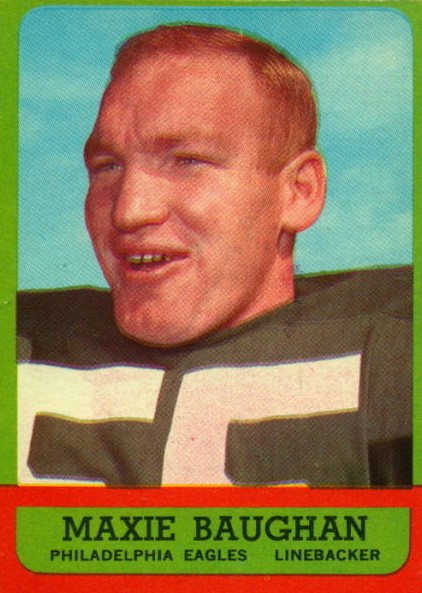 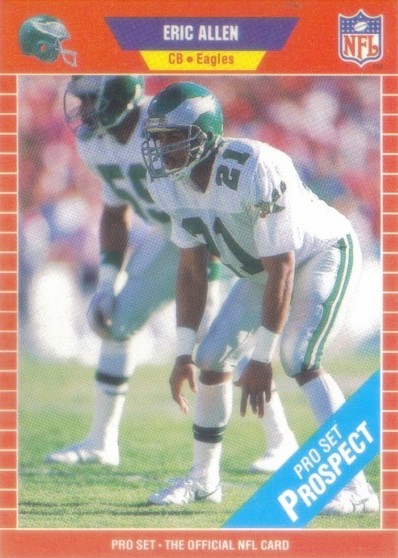 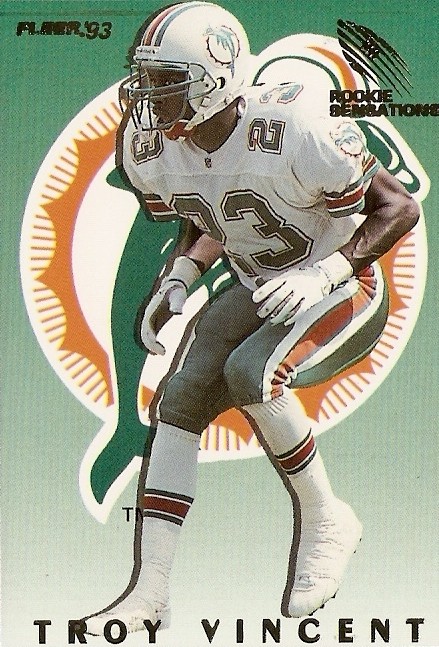 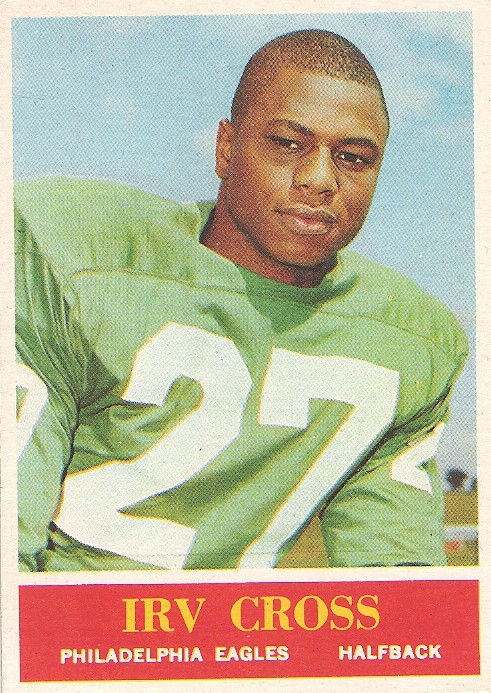 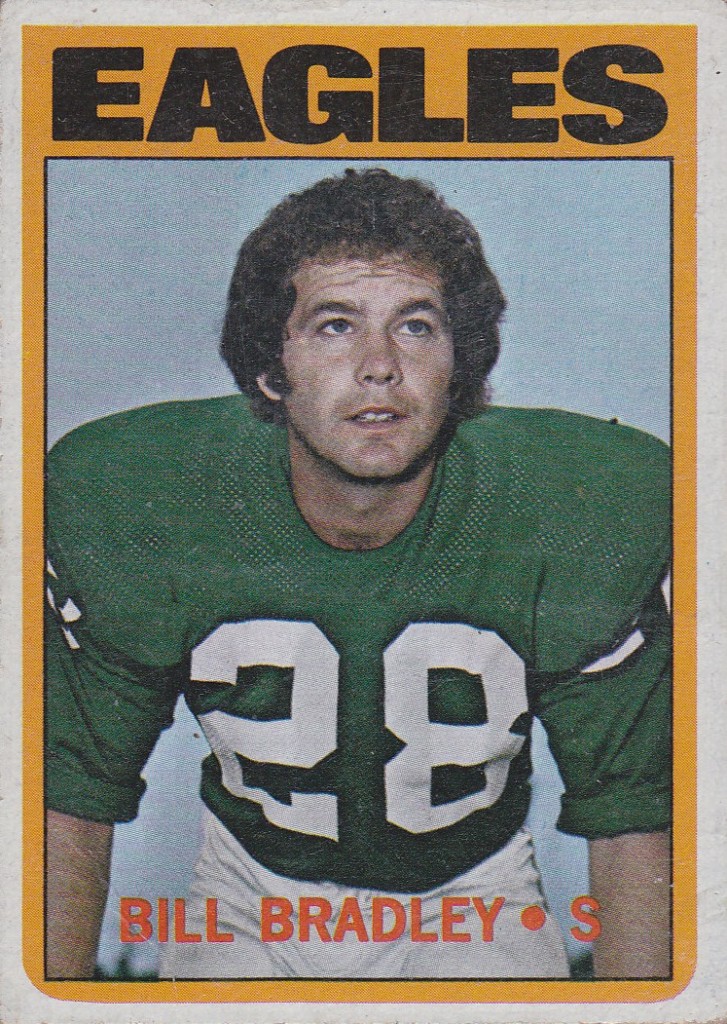 Brian Dawkins, possibly the most beloved Philadelphia athlete ever. Dawkins took over as starting free safety for the Eagles in the 1996 season and remained there for 13 seasons. He was the backbone for that defense. He was a complete safety in his prime. He was part hard hitter, part leader, part coverage ace. He did everything well on and off the field.  Dawkins is an eight time Pro Bowler, a seven time All Pro member, a member of the 2000’s All Decade team, and a member of the Eagles’ 75th Anniversary team. In 2008 he became a member of the 20/20 club for players with 20 sacks and 20 interceptions. 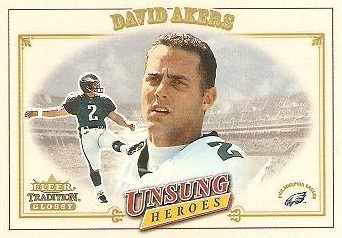 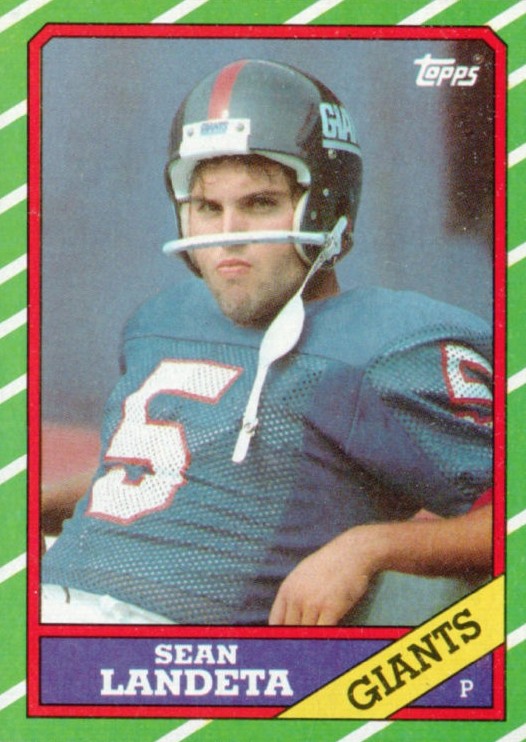 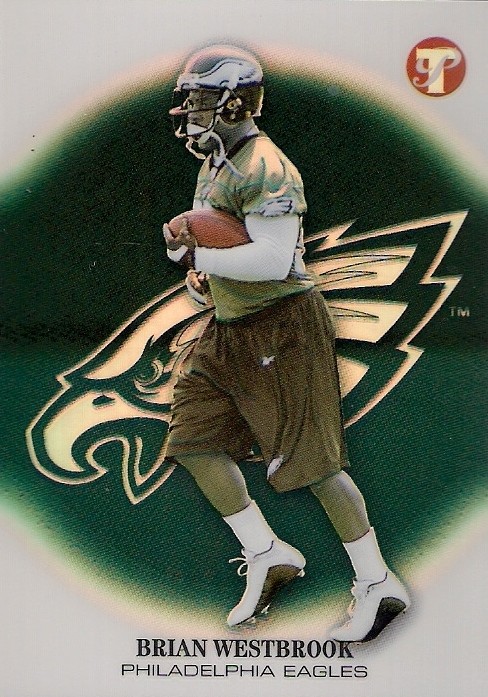 ©MMXIX My All Time Favorites, all pictures and logos, team names are property of the National Football League. This site is not affiliated with the NFL or Philadelphia Eagles.  All Football Cards are low resolution scans from a personal collection and each is credited with the production company name and year.  This site is maintained for research purposes only.